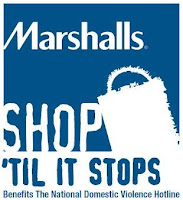 "Buying a pair of shoes at any Marshalls store between October 1 and 15, 2009 will benefit the Hotline. As part of the Marshalls Shop ’til It Stops program, $1 will be donated to the National Domestic Violence Hotline for each pair of shoes sold during this period (up to $150,000).

"For the past 18 years, Marshalls has raised millions of dollars and generated tremendous awareness in an effort to help put an end to domestic violence in the United States through their annual Shop til it Stops program. This year for the first time, the National Domestic Violence Hotline will benefit from this program. Be sure to visit Marshalls to support us!"

Even better, there will be a media blitz about Shop Til It Stops! On Thursday, October 1st, Project Runway's Tim Gunn will be emcee at the Shop 'Til It Stops Kick Off at Marshalls in Santa Monica, CA from noon til 2pm. He'll appear later that day (actually just after midnight on Fri 10/2) on the Craig Ferguson Show (CBS 12:35am ET/PT) to talk about Shop Til It Stops too.
Posted by Rene' MacVay at 4:57 AM