How can I use CELERAIC?

I happened upon celeraic root at the farmer's market earlier this summer. I did not purchase the root but came home to look up uses for celeraic. I found that there were several that I was eager to try. Last week I purchased celeraic and made my version of two of the recipes I found online.

why would I wish to use this unattractive root? One reason, I can get it at the farmers market, a place where I know I can get food close to the source so it is as fresh as possible! Another reason, it's always good to try new foods to round out our diets. I AM A PICKY EATER so I tread carefully when trying something new.

I purchased a celeraic root that was approximately the size of a softball. The root was dense and the stems and leaves were a vibrant green.

I removed the leaves and put them in a bag. I washed and chopped a handful and added them to salad.

I used a potato peeler and cleaned the roots off the celeraic. I was careful to only remove a thin layer as I read that the MAIN nutrients are just below cut the root. I cut the root in two pieces...thinking I would use half of it in two different recipes. I modified the recipes I found online in the following ways:

Recipe 1: SOUP
1. I took a 1/2 celeraic root and 3/4 of a white onion. I sauteed them in olive oil in a pan
2. When the onions were translucent I added 2 cups of vegetable broth and brought it to a boil. After it came to a boil I turned down and let it simmer until the celeraic was soft.
3. The recipe called for adding parsley, sage, thyme, or chives to the soup for seasoning. I added green onions, and about 1 tsp of dry parsley, sage, and thyme to the blender. THEN I added the contents of the put.
4. I blended on "liquify" until the onion and celeriac created a thick liquid.

Add salt and pepper to taste at time of serving.

Recipe 2: Roasted Vegetables
I cut carrots, potatoes, and celeriac into small wedges and placed them on a sheet of nonstick aluminum foil
I added a small amount of olive oil to coat. On half of the mixture I added tarragon and on the other half paprika.
I roasted at 400 for about an hour

A great side dish. Serve with poultry, pork, red meat, or a sandwich.

For more information, read and watch the NPR story about Celeraic 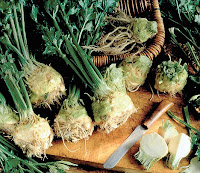